As osteopaths, we have a holistic approach to managing your health. We believe your globalhealth is only as good as the sum of each body system. Meaning that a change in onesystem can affect the whole beingand treating one system in isolation would not beadequate in returning your body/mind to optimal health.

It’s safe to assume you have heard of the skeletal system, which provides the rigid structureof the body. The muscular system which gives us the ability to move. The nervous systemwhich allows us to think and feel. The respiratory system which provides our blood withoxygen. The circulatory system which carries that oxygen and other nutrients to our cells andback. But one integral system consistently flies under the radar. The lymphatic system,which manages our fluid levels, acts as a transport system and plays a major role in ourimmune system.

In the following series I will attempt to explain in a simplified way, what the lymphatic systemis composed of? What’s its purpose? What can happen when things go wrong and how weapproach and treat it osteopathically.

What is the lymphatic system? 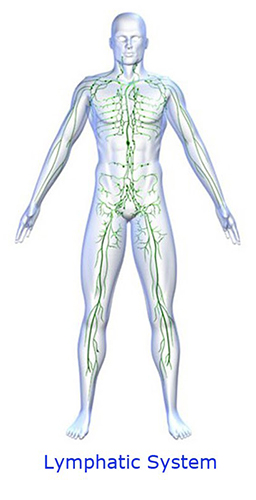 The lymphatic system is made up mostly of vessels, similar to that of arteries or veins. These vessels have very thin leaky walls that are designed to catch fluid and cell debris that is pushed out of the circulatory system. The fluid within the vessels is now known as lymph.

These vessels have valves that close once the pressure inside the vessel rises and further valves that stop the lymph from flowing backwards once inside. These vessels are found throughout the body from head to toe. Small vessels near the skin and surrounding the organs drain into larger deeper vessels near the bones which all flow back into the veins at the top of the chest just under the clavicle (collarbone). The right arm and the right half of the head drain into the right thoracic duct whilst the rest of the body including both legs flows into the left thoracic duct.

Along the pathway the lymph will pass through clumps of cells known as lymph nodes, these range in size from just a few cells to ones large enough that you can easily feel them. A healthy lymph node feels like a rubbery oval shaped ball. These are most easily felt in areas that require heavy drainage such as the groin, underarm and neck.

The rest of the lymphatic system is made up of various organs and specialised tissues located at strategic places around the body.  These include;

What is the purpose of the lymphatic system?

The lymphatic system has three main roles. The first role of the lymphatic system is to recycle fluid squeezed out of capillaries when they exchange their oxygen/nutrients. Blood is pumped by the heart under pressure through the arteries to the tissue where it’s required, here oxygen and other nutrients transfer to the cells and the deoxygenated blood runs into veins which go to the lungs to be replenished, then back to the heart and the process starts again.

When the blood gets to the tissues and exchanges its oxygen/nutrients some fluid is lost in the process. 20L of blood flows out of the heart each day, 17L is taken back up directly by the venous system. That leaves us with 3L  per day of fluid that doesn’t have a home. This fluid cannot get back into the circulatory system immediately, so instead it is caught by the leaky lymph vessels. These vessels do not have thick muscular walls to pump the lymph back to the thoracic ducts so they rely on muscle contractions and internal pressures to help. It is important for our body to recycle this fluid to maintain the health of our internal environment.  This is the first and main purpose of the lymphatic system.

Second is its role in waste transport.. Fluid is not the only thing lingering outside of the cells, present also is bacteria, viruses, cell debris, proteins, hormones etc. All these things need to re-enter the bloodstream to be recycled or excreted. They are either too large or too dangerous to enterthe bloodstream directly so they are swept up with the fluid into the lymphatic system. Now it wouldn’t make much sense if this waste was just dumped back into the bloodstream without any filtering or treatment right??

Here in lines the third role of the lymphatic system, which is arguably the most important. As the lymph fluid containing all sorts of waste drains into the small vessels then into the larger ones, they first have to get past these pit stops known as lymph nodes. At these nodes they are essentially scanned just like when you try to board an international flight. Nodes contain many specialised cells designed for this purpose. Some of these cells are able to break down waste and package it to be transported in the blood, others are able to identify any threatening cells such as bacteria and call for backup which leads to the creation of cells specifically made to hunt and kill this type of bacteria anywhere else it may pop up in your body. You may know this process better as immunity. This is why when you have a throat infection the lymph nodes in your neck will swell up and also why if you find a swollen and enlarged lymph nodes it often indicates an infection is present nearby.

What happens when things go wrong?

The involvement of the lymphatic system in healthy living is often understated. As we can imagine from the roles we have just outlined any disruption in the function of our lymphatics can cause major, global health issues.

In terms of fluid levels, the 3L of fluid pushed through the lymphatic system each day must be recycled back into the circulatory system or our BP will drop and our cells will not get the oxygen they need to survive. If this does not occur not only will BP become unstable but the fluid will accumulate in the tissues. This creates pressure within the tissues which will impact negatively on cellular function. This could lead to various symptoms such as low blood pressure, swelling of tissues such as feet/lower legs, fatigue, lethargy, infection etc.

In terms of waste removal and transport, if these functions are not performed or are compromised toxins will build up in the tissues hindering normal organ function and risking serious infection.

In terms of immunity, the response will be compromised, which will lead to more dangerous infections and slow healing time from any injuries obtained. We will find ourselves getting sick more often and for longer.

Early signs that you may have an issue with your lymphatic system are;

(This is part 1 in our lymphatic series, part 2 can be found here Lymphatic System - The Osteopathic Approach) 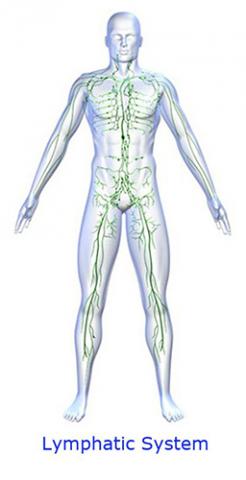